The Spanish measures for grades K-8 are available through the Teacher Deluxe and District versions of easyCBM. For math, there are Spanish translations and read aloud items for all grades. For reading, the measures available on easyCBM are as follows: 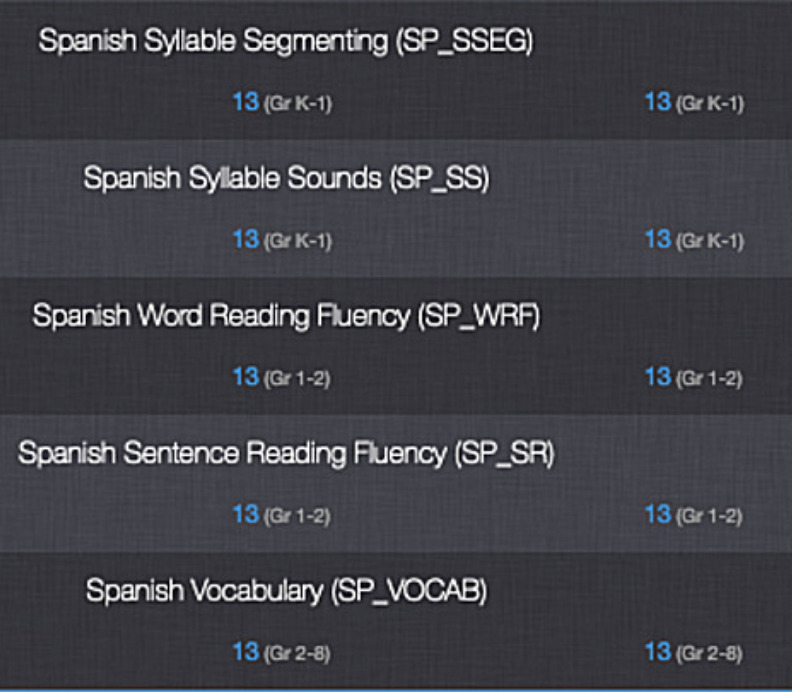 We also offer all our math tests in both English and Spanish language, with both English and Spanish audio read-aloud of all math items that require reading.The Spanish language measures are not included on the free Teacher Lite Edition simply because they were developed several years after the grant funding that underwrote the cost of developing that version of easyCBM ended. Although we applied for a number of grants to allow us to expand the system to include Spanish language assessments, no federal funds were ever granted for that purpose. Because we believed strongly that it was important to provide Spanish language assessments, we personally (as in from personal bank accounts, not university, state, or federal funds) underwrote the cost of developing and piloting the Spanish language measures. We're excited to be able to offer them to all easyCBM users with a Teacher Deluxe or District account and always appreciate it when they are used.

These measures are components of both the Benchmark and Progress Monitoring assessments. Each of the Spanish literacy measure types includes three Benchmark and ten progress-monitoring forms for kindergarten through grade 8. The specific test types offered are based on three years of research at the University of Oregon to identify and develop CBMs specifically addressing the ways in which Spanish literacy develops.

Did this answer your question? Thanks for the feedback There was a problem submitting your feedback. Please try again later.